by David Trancredi and Eugene Braunwald

The Fondation Leducq was created in 1996 by French entrepreneur Jean Leducq and his wife Sylviane. Based in Paris, the foundation seeks to improve human health through international efforts to combat cardiovascular and neurovascular disease. By forging scientific alliances that transcend national borders, and promoting the education of young researchers who thrive in an international context, it hopes to promote innovative research, an efficient use of research resources, and the development of long-term collaborations that will help to meet the challenge of cardiovascular and neurovascular disease in the future. The foundation awarded its first research grants in 1999.

The foundation is constituted according to French law, having a 9-member Board of Directors and an observer appointed by the Minister of the Interior. Responsibility for evaluating the scientific merit of all funding requests made to the foundation lies with the Scientific Advisory Committee, which currently has 14 members serving on a rotating basis and is composed equally of North American and European members who are experts in cardiology, cardiac surgery, and neurovascular medicine (see below). The foundation’s geographic reach reflects the internationalism of the founders, who were equally at home on both sides of the Atlantic.

After the death of Jean Leducq in 2002, Sylviane Leducq took over as President of the foundation’s Board of Directors and remained in this role until she passed away in December 2013. Despite having had little previous experience in executive or management roles, she led the foundation with a mission-driven, common sense approach, overseeing the …

The online version of this article, along with updated information and services, is located online at:
http://circres.ahajournals.org/content/115/12/962 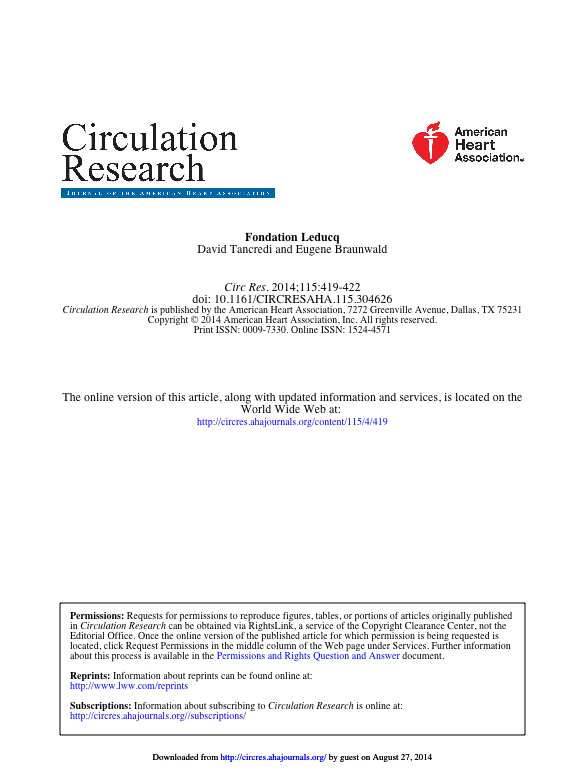